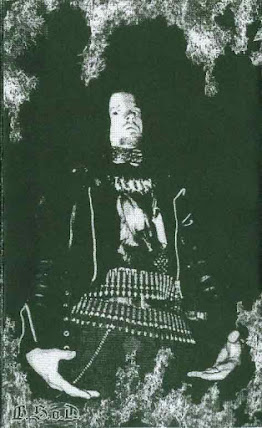 This is a compilation of projects by Andreas Bettinger, known by many as BsoD, and responsible for about 50% of Saarland's musical projects.

Andreas is quite well known in the metal and electronic circles for projects such as Grausamkeit, Corneus and many, many more. This compilation showscases five projects that he is responsible for, some alone, and some with Han-Kyu Choi, a regular collaborator.

The projects on this recording are :

In the case of the latter two, this is the only known recorded material by them. The former 3 have a few tapes out that are in high demand but seem to have been limited in their circulations.

The end of Andrea's early career (1994-2001) was marred with Drug abuse, prison sentences and arrests. In 2001, he released a few tapes which seemingly never got sold to anyone, if you believe your research.He also named a list of projects he was behind which had no associated music to go with them - which is why I think this was recorded around that time as War of Attrition and Orsacchiotto were on that list.

In terms of a public release, I have no further knowledge about this cassette. It came without cover art or a j-card, and isn't on Google or Discogs, I actually can't find any information about this tape at all.

I can confirm it's authenticity, as I own other material by the first three bands mentioned and it's undoubtedly them. Andreas also has a very disctinct sound, which matches the material here.

So what to expect from this record? It nestles in to a number of genres, such is the experimentalism of both artists on here.

It's part Noise and Black Metal, part Experimental and Electronic. I think fans of BsoD and Choi will be all over this, and it certainly shows the mindset of a man losing himself to Heroin.

AT THE TIME OF THIS POST, THIS RELEASE DOES NOT EXIST ON DISCOGS OR ANY SIMILAR SITE. PLEASE DO NOT BUY ANYTHING THAT SUDDENLY POPS UP AS IT IS OBVIOUSLY A FAKE / BOOTLEG.