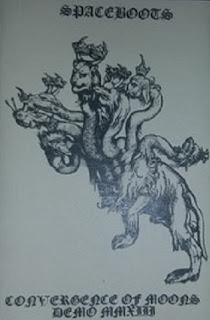 Spaceboots is one of the bands from the Arcane Visions Circle (based in Santa Rosa, CA). This is their only official release, except for a live Video they recorded which was only traded within the circle.

The release is Raw Black Metal with Ambient elements, rooted in Punk influence; mirroring the USBM scene these days. The tape is actually really enjoyable, with all three tracks being to my liking. It's just a shame that no one really discovered this group before as it has merit coming out of it's orifices.

It's not as NASA-inspired as both artist and release names infer, but when you call a track "Endless Wall of Limbs", you've already won.